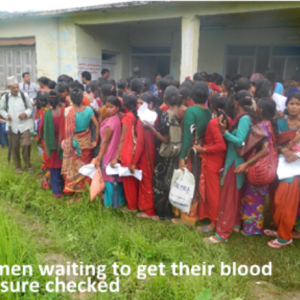 Achham is a remote district located in Province 7 of in Far West Nepal. The total area of Accham is 1692 km² and the current population is 257477. Mangalsen is the district headquarter whereas Sanphebagar is the most popular town in Achham which also boasts one of the few airplane landing strips in Far West Nepal.

On July 5, 2013, NFCC conducted a screening Camp in Sanphebagar Village Development Committee. Achham and furthermore Sanphebagar in Accham were selected as sites due to the extremely high levels of cross border informal migration into India as well as the high reported prevalence of HIV and STIs’ which would both contribute to potentially higher vulnerability of women to HPV and possibly cervical cancer. The camp was conducted in collaboration with the local Government Health Post and local NFCC staff. As is standard practice, all women who attended the camp were provided the following services:

A total of 362 women were screened. For the first time in the history of Nepal, self-sampling was introduced. Women were provided both self-collected and clinician collected cervico-vaginal specimens.  These specimens were preserved in a cold chain on a required temperature. It was then sent to United States for the test and the result received was passed to the individual client by NFCC local staff based in Sanphebagar. All HPV positive clients are referred for VIA test to nearby hospitals as VIA is the mandated primary screening test for cervical cancer by the Government of Nepal. Women requiring further care and treatment were referred to a doctor at the Seti Zonal Hospital in Dhangadi, Kailali. The said doctor was already aware of the camp conducted and the women being referred. Both the women and the doctor were both continually followed up via phone and where possible by in person by NFCC staff to ensure continuity of care and treatment. Those choosing to get treatment in India or other private sector sites were also followed up by phone to ensure treatment had been taken and complete reporting had been done.